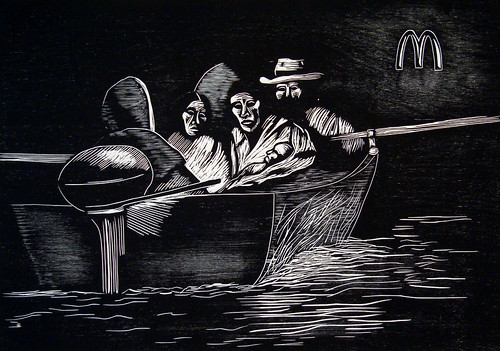 It is a pleasure to try something new and in this case to review a show and its works of art via the medium of the Internet. Thanks to this new technology, everyone has access to events across the world or in this case to view the prints of Carlos Barberena at Prospectus Art Gallery in Chicago. Before going on to describe the disturbing, yet spectacular conceptual landscapes found in his prints, one can reflect on the presence the Internet plays in our lives. In this case it does so in a positive way allowing the viewer to cross physical barriers and experience his works of art, and the message within it. It allows any person to cross the space and time we are usually confined to by the physical matter. So I turned on the computer and went to the website, and began to see and take in what he portrays in his prints. I started with his website’s gallery of master prints from: Who Lives By The Sword… to Ceci nest pas une pipe, and everything in between. What is captivating in the beauty of his work are his combination of images which unveil a nightmarish world of past historical events; from ancient to present times. 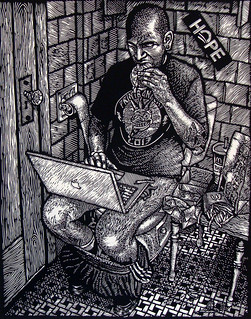 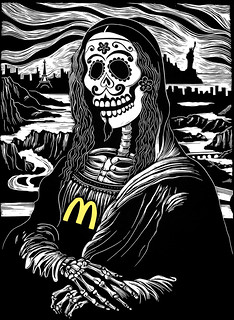 Barberena uses images from pop culture, from present and past day societies, as well as from political and cultural tragedies. He uses past artworks and manipulates them to recontextualize the meaning from a present day point of view. By examining the elements that are destroying our culture, society and people; while exploring our complicity with such forces. The viewer is never let off the hook. We are living in a McDonald’s dominated society as the McMona and the McShitter show us. The Refugees is a print depicting a group of refugees fleeing their homeland for reasons unknown and approaching the land of McDonald’s. It is the familiarity of present day items found in his prints that awaken us to the reality or nightmare this reality has become. 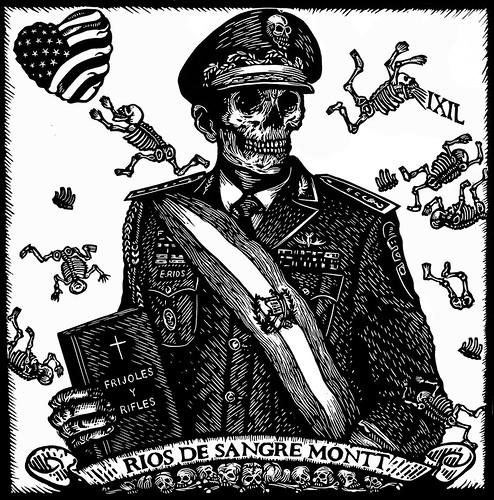 In Frijoles y Fusiles there is a sinister Uncle Sam-like general with cadavers in the background flying all around, including one flying toward the US flag in the shape of a heart. The general is Efrain Ríos, who is holding the bible of Frijoles y Rifles (Guns and Beans) and the words Ríos de Sangre Montt (Montt Rivers of Blood) emblazoned on the banner by his waist. This symbolizes the reign of terror after the dictator assumed power with the help of the U.S. in the coup d’etat in 1982, which is known as the “Gun and Beans” killing campaign. During his dictatorship, he is known to have killed around 10,000 people, mostly indigenous Mayas of Ixil descent. Trained by the infamous School of the Americas, he was supported by the Reagan Administration; so he is known to be one of Uncle Sam’s nephew. He was recently tried for crimes against humanity and genocide and was sentenced to 80 years in prison, but the constitutional court of Guatemala overturned the conviction. 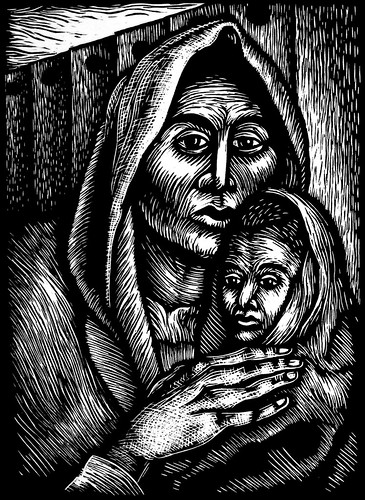 Transcending the U.S., Barberena examines injustices occurring in the world due to the behavior of the imperial powers and the First World. One is The Palestinian Mother who symbolizes the suffering of the Palestinian people under the oppression of Israel with the sanction of the U.S. The British Prostitute demonstrates Carlos’s capacity to tie the past with the current forces of imperial oppression. There is a fantastic recreation of the Whore of Babylon, a multi-headed beast, who has a surveillance camera as one of its many demonic heads. This of course mirrors our surveillance state through all means possible from cellphones to the Internet, as we all know thanks to Edward Snowden. 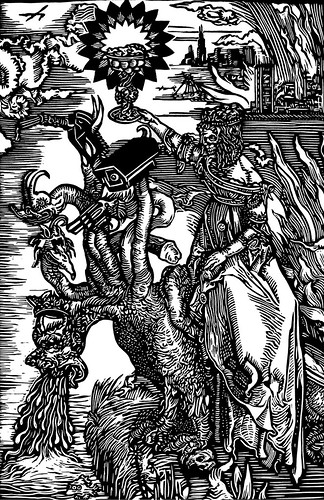 Other prints focus on mainstream subjects to wake us from our stupor. Converting Andy Warhol’s Campbell Soup Cans to a Coca Cola, it shows we haven’t outgrown much; from a can of processed soup to a chemical cocktail of high-fructose sugar and other additives your body does not need. 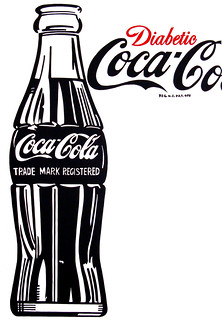 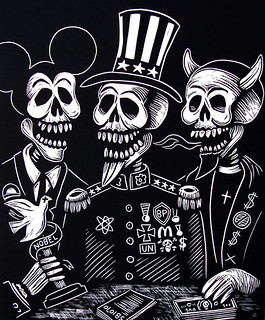 In War and Peace (named after Tolstoy’s novel) we find three skeletal figurines. The first skull face with the Mickey Mouse ears is Obama, clutching his Nobel peace prize, even though he continues the military industrial wars. Uncle Sam occupies the center, chest displaying medals from BP, UN, McDonald’s and other corporate symbols. The third is the control mechanism religion, a skeletal priest with a cross, money and horns. 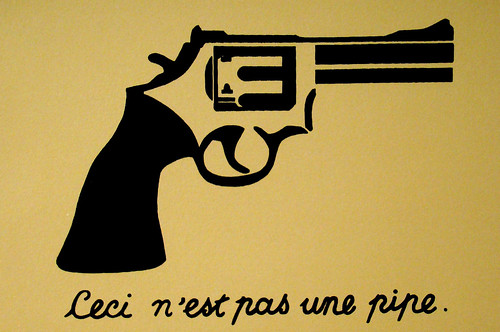 In Prometheus II he shows us the Greek who stole the secret of fire from the gods; and in this case an artist who is being condemned and didn’t expect it. One of my favorites is Ceci nest pas une pipe (This is not a Pipe) which is named after René Magritte’s piece by the same name; except in Barberena’s print the pipe is not a pipe, it’s a gun. So the image of the gun leaves no room for the imagination, there’s no pipe, but plenty of violence via this symbol of death. 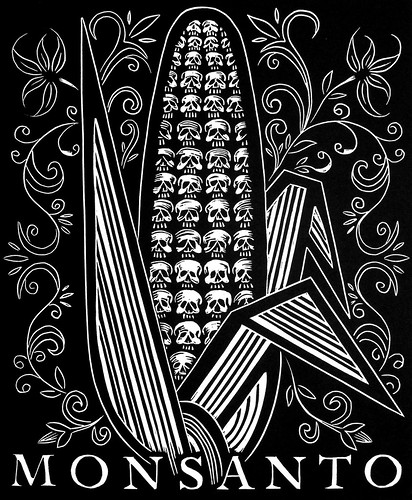 In Monsanto he depicts the damage to the environment, to our health, to one of the native and principal staples in our diet: Corn. This print opens with a cornhusk full of skulls inside, quite appropriate for what it symbolizes. And this criminal entity Monsanto is just another profiteer in our history thanks to the US and its trade policies when it comes to business like Chiquita who destroys our land in the name of profits. 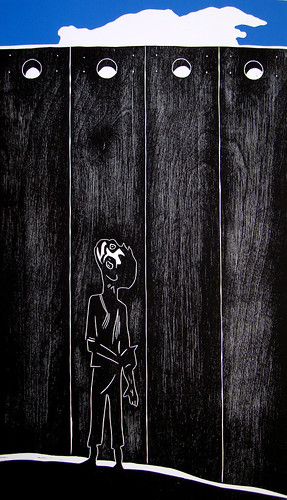 In El Niño y la Nube a child looks longingly up towards the sky, the only existing color within his space, and to a cloud, changing shape with his imagination. Depending on our point of view, this can be sad or joyful. The image is very cubist-like including the child who is by a wall. The wall could be any wall in the world; the US/México wall, the Israel/Palestine wall. This barrier is one created and built by some people to keep others out or inside. What the print shows most of all is the child’s desire to one day climb out of his world trap. In his print, Self-Portrait after Van Gogh, the artist depicts himself in the image of Van Gogh. Two artists occupying the same image. There is something hidden, a mirror reflection, a portrayal of what is meant to be hidden; but is open to willing eyes in the peculiar universe where art merges with life. 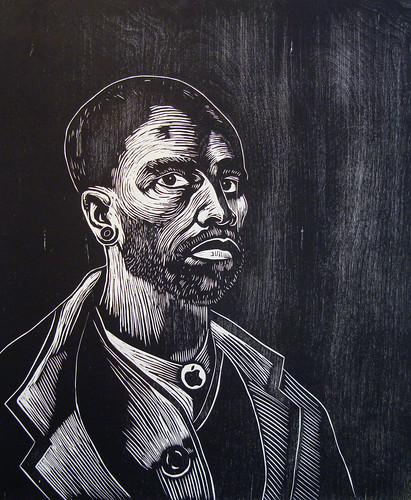 I’ll end with The Scream adaptation, for no particular reason other than I found it visually frightening and capable of waking anyone out of their apathy. Based on The Scream by Edvard Munch, this version has an exploding nuclear bomb in the background and surroundings images of industry and pollution. The man on the bridge is screaming and the couple is walking away while some people on boats are crossing the waters toward the city. Life goes on, will the viewer wake-up? Carlos Barberena uses his prints to show us the horrors and injustices created by mankind. Besides the visuals, what I enjoy most about his work is that he mixes beauty, politics, history, science in this modern world. His work makes us question our surroundings and ourselves. The prints scream: “I won’t accept this injustice, stop being afraid, wake-up and challenge this new world order.” 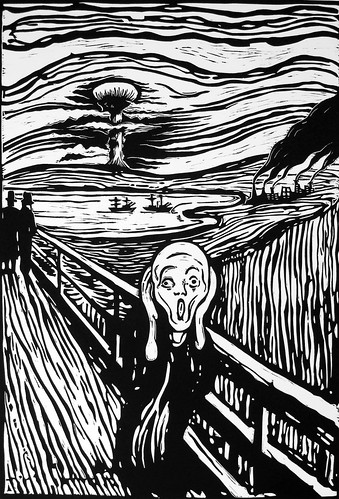 “The Scream” (after Munch)

*Leticia Cortez. Born in México and grew up in Chicago. She worked as a teacher at Truman College. She is a writer, educator and activist who currently lives and teaches in Santa Fe, Nuevo Mexico. cortezruiz2005@yahoo.com 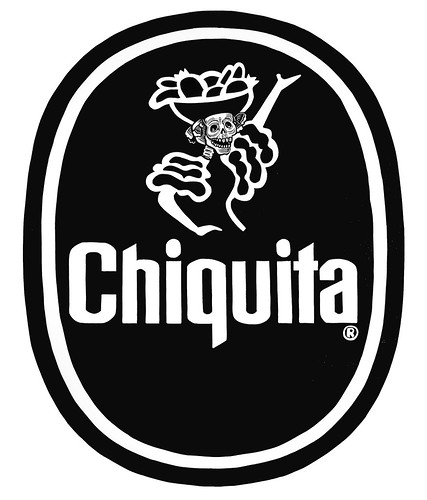 “IN GREED WE TRUST”
A collection of Linocuts and Woodcuts by Chicago Artist Carlos Barberena
Open to public: March 14th through May 4th, 2014 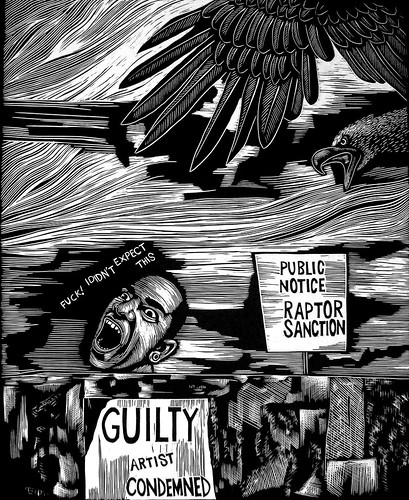