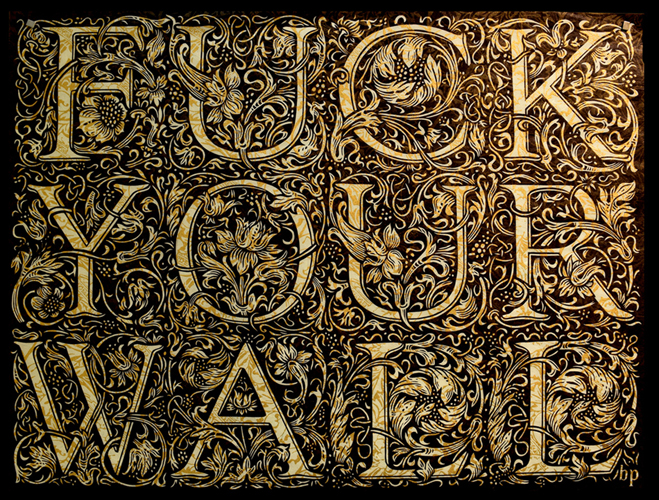 MINTHORNE GALLERY AT GEORGE FOX UNIVERSITY in Newberg has an extraordinary exhibition of breathtaking relief prints that passionately and angrily capture and protest the American zeitgeist – not only the reactionary political theater in Washington, but also the corporate-consumerist culture in which it plays out. A piece titled Fuck Your Wall displays those exact words in huge letters. Another features Trump, Twitter machine in hand and sporting a swastika armband. Graphic Resistance is the kind of show you’d expect to see in Portland. But it’s here, mounted in a small gallery on the lush, tree-shaded grounds of a private Christian school.

George Fox is the oldest Christian university in the state, with Quaker roots that go back more than 125 years ago. The show, which opened earlier this month in the Minthorne (a lovely, sunlit space in the Hoover Building, just a couple of blocks off Oregon 99W), is by Chicago artist Carlos Barberena. A native of Nicaragua, he is known for incorporating images from pop culture, even including political and cultural tragedies, of which there are plentiful examples regardless of where one looks in the world. He has exhibited in Costa Rica, Estonia, France, Mexico, Nicaragua, Spain, and the United States. 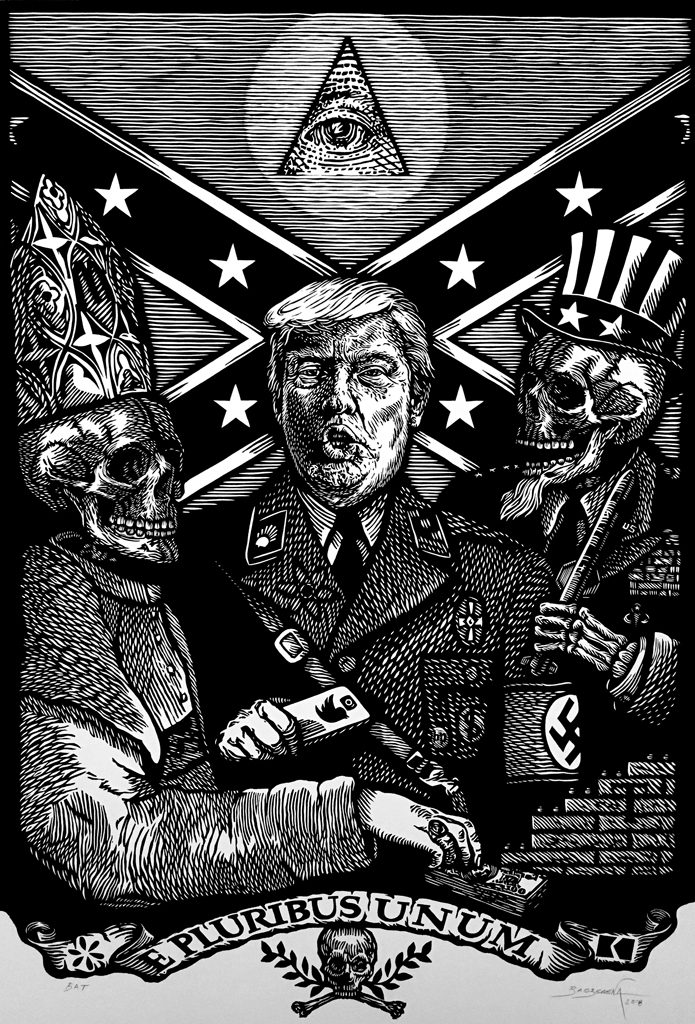 I was curious to know how his work landed in Newberg, of all places. Jennifer Salzman,  director of exhibitions and collections at the university, was happy to explain. “Our printmaking professor, Jillian Sokso, knew of Carlos Barberena and was a fan of his work,” she said. “She asked me last year if I could try to get an exhibition with him. I contacted Carlos … and he was thrilled to accept.” “It is a true pleasure to host Carlos,” she added. “His work and experiences have really inspired our students and faculty alike.”

For any artist, Trump is obviously an easy target. In Barberena’s E PLURIBUS UNUM, he takes a direct, individualized hit. But the piece (which is also the largest in the show) places him in a broader context, both socially and historically: He is flanked by two skeletons attired to represent the Catholic church and the U.S. military. Look closely at the President’s own attire and you see more than the swastika. There’s also the corporate logo for Shell, the atomic symbol, and a dollar sign. Behind them is the Confederate flag.

Familiar images abound. The atomic symbol, mushroom clouds, and corporate logos for Fox News, Apple, and McDonald’s are sprinkled throughout these vistas of American madness. The quintessence of that madness is captured in a piece titled McShitter. It shows a man taking care of business on the toilet as he taps away on a laptop with one hand and shovels in a Big Mac with the other. Behind him is a bumper sticker for Obama’s “Hope.” 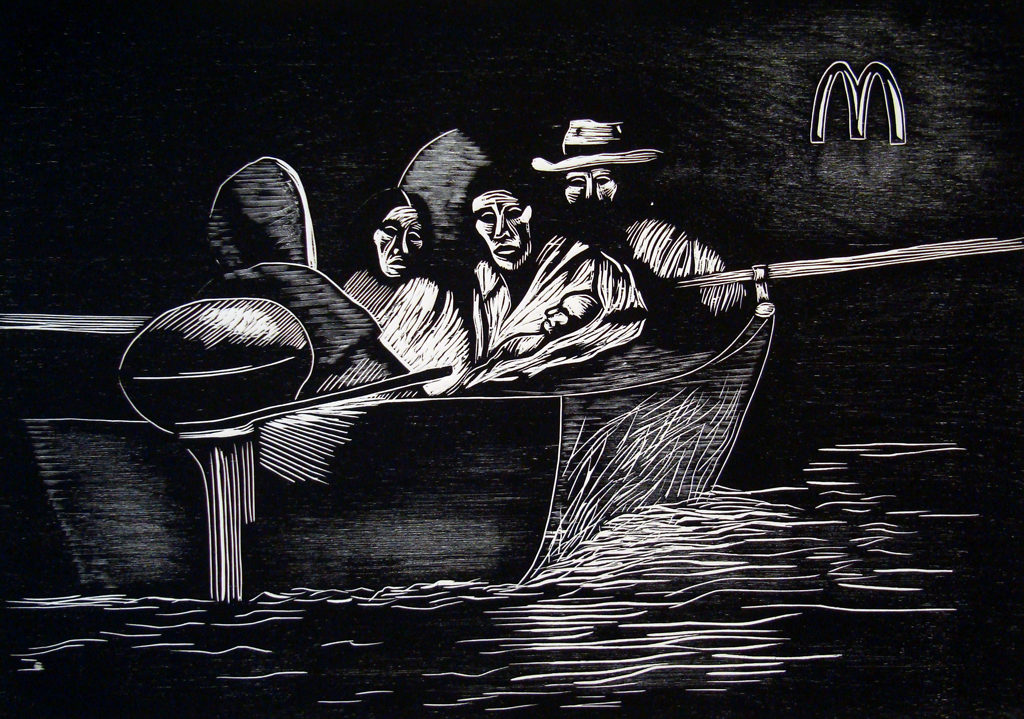 No exhibition wrestling with this political moment would be complete without dealing with immigration, and Barberena does so in a variety of ways, both in terms of content and style. One piece features a youth looking mournfully at the blue sky, out of reach behind a towering wall. Another depicts immigrants in a small boat, rowing toward McDonald’s golden arches.  I do not know if it was intentional, but it’s striking that in a room filled with dozens of faces, Trump’s is the only white one. Surrounded by the faces of Latinos, African-Americans, Muslims, and indigenous people, the WASP stands alone.

Gallery hours are 9 a.m. to 5 p.m. The exhibition runs through Oct. 25 and admission is free.

ARTS JOURNAL: Spent a couple of evenings bouncing between LeRoi Jones’ Blues People and Samuel Charters’ The Legacy of the Blues. I mentioned on my Facebook page that I was looking at the blues more methodically, and within a few hours, one friend offered me a record player, and another said I could borrow her vinyl collection. Who says Facebook is all bad?

This story is supported in part by a grant from the Yamhill County Cultural Coalition, Oregon Cultural Trust, and Oregon Community Foundation.